by Glen Bull, University of Virginia

Today it is commonplace that computers and technology permeate almost every aspect of education. In the late 1960s, though, the idea that computers could serve as a catalyst for thinking about the way children learn was a radical concept.

In the early 1960s, Seymour Papert joined the faculty of MIT and founded the Artificial Intelligence Lab with Marvin Minski. As a mathematician and educational theoretician working in a technology-rich environment, he was in the right place with the right background to consider the educational possibilities of technology. Others had suggested that the computer could serve as a delivery system for presenting content. Papert suggested that the computer could also serve as an environment for “thinking about thinking.”

The educational programming language Logo was the first computing language designed specifically for children. Papert made use of robots in the MIT Artificial Intelligence laboratory to create “floor turtles” (so called because of the hemisphere-shaped dome) that could be guided by children’s commands. These evolved into “screen turtles” that could draw mathematical patterns on the screen of a computer terminal. For example, the command FORWARD 100 RIGHT 90 repeated four times would produce a square drawn by the screen turtle. 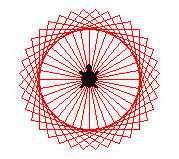 Papert summarized many of his observations about children’s use of Logo in the book, Mindstorms: Children, Computers, and Powerful Ideas, published in 1980. An underlying premise was that not only can children use technology to become creators, but important concepts can be embedded in this process. A related idea is that learning can be associated with playful exploration.

This early exploration of ideas about potential educational uses of technology resulted in a number of outcomes. Programmable Lego bricks developed in the M.I.T. Media Lab were commercialized as LEGO Mindstorms robotics kits.

These robotics systems controlled by successors to the Logo programming language have had a surprisingly wide reach. They have been incorporated into the curriculum of the Costa Rican educational system, for example.

Software such as the widely adopted Geometer’s Sketchpad also reflects the influence of Logo. While this software is designed specifically for mathematics teaching, many of the concepts associated with Logo are embedded in this product. Technologies such as the Sketchpad significantly extend the mathematical topics that could otherwise be explored (Garofalo et al., 2000, p. 71). Geometer’s Sketchpad projects such as a student’s animated model of the solar system incorporating the underlying mathematics are foreshadowed by explorations conducted in Logo in an earlier era.

Papert’s vision of the student as a creator is largely coming to pass. A study by the Pew Internet and American Life initiative reports that a tipping point occurred in November 2005. At that time, for the first time, more than half of all U.S. teenagers aged 12 to 17 were found to be content creators, using the Web to create digital videos, Web logs, photography, and original artwork, as well as remixed content derived from other digital resources on the web. (See “Teen Content Creators and Consumers” on the Pew/Internet Web site: http://www.pewinternet.org/PPF/r/166/report_display.asp)

This transition is largely occurring outside of schools, however, with little integration in the curriculum within school walls. Despite progress, use of these technologies by students within schools remains limited, largely confined to visits to school laboratories on special occasions.

In the meantime, Papert continues to work toward a vision in which every child would employ a computer as a tool for thinking. In November 2005 the Secretary of the United Nations, Kofi Annan, unveiled the prototype of a $100 laptop developed in the MIT Media Lab as part of its One Laptop Per Child initiative. The director of the Media Lab, Nicholas Negroponte, describes the objective of the initiative to be the same as Papert’s original vision – to revolutionize how we educate the world’s children. Negroponte notes that just as pencils are “tools to think with, sufficiently inexpensive to be used for work and play, drawing, writing, and mathematics. A computer can be the same, but far more powerful.” (See “$100 Laptop” on the MIT Media Lab Web site: http://laptop.media.mit.edu/faq.html)

The goal of the initiative is to provide every child with a laptop to allow them “access to knowledge and modern forms of education [based] on the ‘constructionist’ theories of learning pioneered by Seymour Papert …” (http://laptop.media.mit.edu/faq.html). The projected date for distribution is 2007, with governments as diverse as China, Brazil, Thailand, and Egypt participating in discussions of integration into their respective educational systems.

Today’s personal computers have capabilities that could only have been dreamed about in the 1960s. It seems equally likely that the technologies of the future will have other, unforeseen capabilities and that at some point the threshold of cost will make it possible for every child to have one.

Once these technologies are widely available and in the hands of every child, the question still remains – how will they be best employed educationally? This is the area in which Seymour Papert’s contribution may ultimately prove to be most significant. Many questions related to “thinking about thinking” are not greatly different today than in 1968.

In 1968 Papert expressed the concern, republished in Tutor, Tool, Tutee in 1980, that often the phrase “technology and education” means “inventing new gadgets to teach the same old stuff in a thinly disguised version of the old way.” Two decades later similar sentiments were echoed by Garofalo: “Using technology to teach the same mathematical topics in fundamentally the same ways that could be taught without technology does not strengthen students’ learning of mathematics and belies the usefulness of technology” (Garofalo, Drier, Harper, Timmerman, & Shockey, 2000, p. 71).

In practice, however, this is more easily said than done, as current practice in today’s schools demonstrates.

These fundamental questions related to thinking about thinking transcend any specific technology, and in that sense are timeless. For that reason, we are pleased to be able to republish and make available the original paper, “Teaching Children Thinking” — written nearly four decades ago — along with an updated introduction by the author.